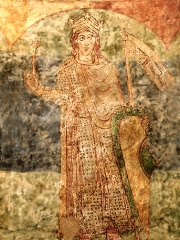 Vratislaus (or Wratislaus) II (Czech: Vratislav II.) (c. 1032 – 14 January 1092), the son of Bretislaus I and Judith of Schweinfurt, was the first King of Bohemia as of 15 June 1085, his royal title granted as a lifetime honorific from Holy Roman Emperor Henry IV that did not establish a hereditary monarchy. Before his elevation to the royal dignity, Vratislaus had ruled Bohemia as duke since 1061. On his father's death in 1055, Vratislaus became duke of Olomouc, whereas his older brother became Duke of Bohemia as Spytihněv II. Read more on Wikipedia

Vratislaus II of Bohemia was a member of the Přemyslid dynasty. He was the first King of Bohemia to also become Holy Roman Emperor. He is most famous for his victory over Duke Bretislaus I of Bohemia and his allies in a battle near Brno in 1029.

Among politicians, Vratislaus II of Bohemia ranks 3,140 out of 15,710. Before him are Tomislav Nikolić, Henry II the Pious, John Foster Dulles, Louis Alexandre, Count of Toulouse, Agnes of Poitou, and Otto Bauer. After him are Louis Antoine, Duke of Enghien, Vladimir Zhirinovsky, Prince Pierre, Duke of Valentinois, Salome Zourabichvili, Locusta, and Fan Li.