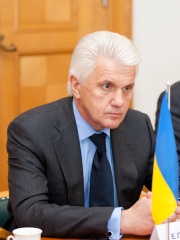 Volodymyr Mykhailovych Lytvyn (Ukrainian: Володи́мир Миха́йлович Литви́н, IPA: [woloˈdɪmɪr mɪˈxɑjlowɪtʃ lɪtˈwɪn]; born April 28, 1956) is a Ukrainian politician best known for being Chairman of the Verkhovna Rada, the Ukrainian parliament. Having previously served in that position from 2002 until 2006, he was re-elected in December 2008 after his party agreed to join the former coalition of Yulia Tymoshenko in an expanded capacity and stayed Chairman till December 2012. Read more on Wikipedia

Since 2007, the English Wikipedia page of Volodymyr Lytvyn has received more than 25,735 page views. His biography is available in 17 different languages on Wikipedia making him the 12,324th most popular politician.