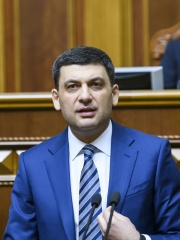 Volodymyr Borysovych Groysman, sometimes transliterated as Volodymyr Borysovych Hroisman (Ukrainian: Володи́мир Бори́сович Гро́йсман; born 20 January 1978), is a Ukrainian politician who was the Prime Minister of Ukraine from 14 April 2016 to 29 August 2019.From March 2006 until February 2014 Groysman was the Mayor of Vinnytsia. From then to November 2014, he held two concurrent positions as the Vice Prime Minister of Ukraine for Regional Policy and the Minister of Regional Development, Construction and Housing and Communal Services of Ukraine. He was elected into parliament on the party lists of the pro-presidential Petro Poroshenko Bloc. Read more on Wikipedia

Since 2007, the English Wikipedia page of Volodymyr Groysman has received more than 523,224 page views. His biography is available in 42 different languages on Wikipedia making him the 10,680th most popular politician.