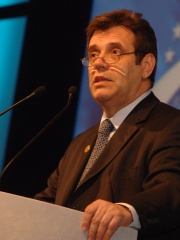 Vojislav Koštunica (Serbian Cyrillic: Војислав Коштуница, pronounced [ʋǒjislaʋ koʃtǔnit͡sa] (listen); born 24 March 1944) is a Serbian former politician who served as the last president of FR Yugoslavia from 2000 to 2003, and as the prime minister of Serbia in two terms (from 2004 to 2007, and from 2007 to 2008).Koštunica won the 2000 Yugoslav presidential election as a candidate of a wide alliance Democratic Opposition of Serbia (DOS), which led to overthrow of Slobodan Milošević and withdrawal of international sanctions against Yugoslavia. He strictly opposed the cooperation with International Criminal Tribunal for the former Yugoslavia (ICTY) and his party left the coalition government in protest of a decision to extradite Slobodan Milošević to the ICTY. After the 2003 Serbian parliamentary election, the first elections after the dissolution of DOS and assassination of Prime Minister Zoran Đinđić, Koštunica formed the minority government with the support of the Milošević's Socialist Party of Serbia and became the head of government. He was one of the crucial figures for the adoption of the first constitution of an independent Serbia, as well as for declaring Serbia a neutral country. Read more on Wikipedia

Vojislav Koštunica is a Serbian politician who served as the first President of Serbia from 2000 to 2004. He was the presidential candidate of the Democratic Party of Serbia in the 2012 Serbian presidential election.

Among politicians, Vojislav Koštunica ranks 2,341 out of 15,710. Before him are Mieszko I of Poland, Juscelino Kubitschek, Emperor Zhao of Han, Donald Tusk, Ambrogio Spinola, 1st Marquess of Balbases, and Nynetjer. After him are Omar Bongo, Hermann von Salza, Eudokia Makrembolitissa, Barbara of Portugal, Sergo Ordzhonikidze, and Adad-nirari III.