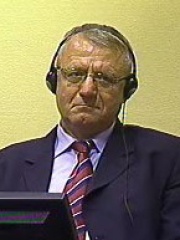 Vojislav Šešelj (Serbian Cyrillic: Војислав Шешељ, pronounced [ʋǒjislaʋ ʃěʃeʎ]; born 11 October 1954) is the founder and president of the Serbian nationalist Serbian Radical Party (SRS); he was convicted of war crimes by the International Criminal Tribunal for the former Yugoslavia (ICTY). From 1998 to 2000, he was Deputy Prime Minister of Serbia. He voluntarily surrendered to the ICTY in February 2003 but his trial did not begin until November 2007. Read more on Wikipedia

Among politicians, Vojislav Šešelj ranks 4,290 out of 15,710. Before him are Carrie Lam, Hanno the Great, Shoshenq II, Barak, Rudolph III of Burgundy, and Emperor Shunzong of Tang. After him are Andrew, Duke of Calabria, Grand Duke Alexander Mikhailovich of Russia, Munjong of Goryeo, Charles Edward, Duke of Saxe-Coburg and Gotha, François Fillon, and Tewodros II.