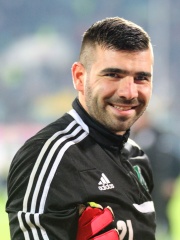 Vladislav Boykov Stoyanov (Bulgarian: Владислав Бойков Стоянов; born 8 June 1987) is a Bulgarian footballer who plays as a goalkeeper for Ludogorets Razgrad and the Bulgarian national football team. Stoyanov began his youth career with Metalurg Pernik before transferring to CSKA Sofia in 2000, where he developed in their academy. In 2004, he left CSKA to sign first professional contract with Naftex Burgas. Read more on Wikipedia

Since 2007, the English Wikipedia page of Vladislav Stoyanov has received more than 76,080 page views. Her biography is available in 15 different languages on Wikipedia making her the 9,024th most popular soccer player.