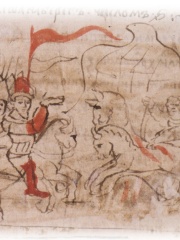 Vladimir Yaroslavich (Russian: Владимир Ярославич, Old Norse Valdamarr Jarizleifsson; 1020 – October 4, 1052) reigned as prince of Novgorod from 1036 until his death. He was the eldest son of Yaroslav I the Wise of Kiev by Ingigerd, daughter of king Olof Skötkonung of Sweden.In the state affairs he was assisted by the voivode Vyshata and the bishop Luka Zhidiata. In 1042, Vladimir may have been in conflict with Finns, according to some interpretations even making a military campaign in Finland. In the next year he led the Russian armies together with Harald III of Norway against the Byzantine emperor Constantine IX. Read more on Wikipedia

Page views of Vladimir of Novgorods by language

Among politicians, Vladimir of Novgorod ranks 9,069 out of 15,710. Before him are Keisai Eisen, James Harrington, Dirk V, Count of Holland, Marcantonio Trivisan, Gerda Steinhoff, and Josep Sunyol. After him are Prince Ferdinand, Duke of Castro, Nicomedes II of Bithynia, Kuzma Minin, Manlia Scantilla, Arshak II, and Audoin.