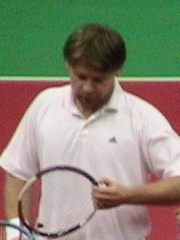 Vladimir Nikolayevich Voltchkov (Belarusian: Уладзімір Мікалаевіч Валчкоў, Uładzimir Mikałajevič Vałčkoŭ; Russian: Владимир Николаевич Волчков; born April 7, 1978) is a Belarusian former professional tennis player. Voltchkov reached the semifinals at the 2000 Wimbledon Championships, where, as a qualifier, he lost to Pete Sampras in straight sets. He represented Belarus in both the Davis Cup and the Olympic Games in 2000, also won the Wimbledon juniors competition in 1996. Read more on Wikipedia

Since 2007, the English Wikipedia page of Vladimir Voltchkov has received more than 72,766 page views. Her biography is available in 16 different languages on Wikipedia making her the 680th most popular tennis player.

Among TENNIS PLAYERS In Belarus