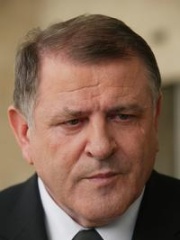 Vladimír Mečiar (Slovak pronunciation: [ˈʋlaɟimiːɾ ˈmɛtʃɪ̯aɾ]; born 26 July 1942) is a Slovak politician who served as Prime Minister of Slovakia three times, from 1990 to 1991, from 1992 to 1994 and from 1994 to 1998. He was the leader of the People's Party - Movement for a Democratic Slovakia (ĽS-HZDS). Mečiar led Slovakia during the dissolution of Czechoslovakia in 1992–93 and was one of the leading presidential candidates in Slovakia in 1999 and 2004. Read more on Wikipedia

Since 2007, the English Wikipedia page of Vladimír Mečiar has received more than 96,899 page views. His biography is available in 36 different languages on Wikipedia making him the 3,409th most popular politician.

Among politicians, Vladimír Mečiar ranks 3,387 out of 14,801. Before him are Rob Roy MacGregor, Anne, Princess Royal and Princess of Orange, Carlos Hugo, Duke of Parma, Emmerson Mnangagwa, Bretislav I, and Henry II, Duke of Austria. After him are Ulrich von Jungingen, António, Prior of Crato, Theudebert II, Menua, Magnus IV of Norway, and Władysław Anders.