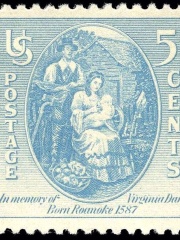 Virginia Dare (born August 18, 1587, in Roanoke Colony, date of death unknown) was the first English child born in a New World English colony.What became of Virginia and the other colonists remains a mystery. The fact of her birth is known because John White, Virginia's grandfather and the governor of the colony, returned to England in 1587 to seek fresh supplies. Read more on Wikipedia

Among people born in 1587, Virginia Dare ranks 14. Before her are Virginia Centurione Bracelli, Ferdinando Gonzaga, Duke of Mantua, Esaias van de Velde, Magdalene of Bavaria, Johannes Fabricius, and Song Yingxing. After her is Yun Seondo.