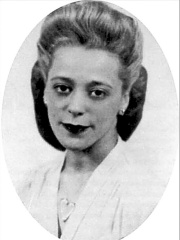 Viola Irene Desmond (July 6, 1914 – February 7, 1965) was a Canadian civil rights activist and businesswoman of Black Nova Scotian descent. In 1946 she challenged racial segregation at a cinema in New Glasgow, Nova Scotia by refusing to leave a whites-only area of the Roseland Theatre. For this, she was convicted of a minor tax violation for the one-cent tax difference between the seat she had paid for and the seat she used, which was more expensive. Read more on Wikipedia

Since 2007, the English Wikipedia page of Viola Desmond has received more than 1,338,946 page views. Her biography is available in 15 different languages on Wikipedia making her the 283rd most popular social activist.

Among SOCIAL ACTIVISTS In Canada

Among social activists born in Canada, Viola Desmond ranks 2. Before her are Paul Watson (1950).