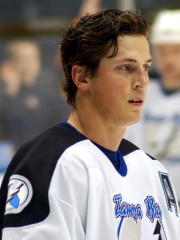 Vincent "Vinny" Lecavalier (born April 21, 1980) is a Canadian former professional ice hockey player who played seventeen seasons in the National Hockey League (NHL) between 1998 and 2016. Vincent Lecavalier was the captain of the Tampa Bay Lightning for the 2000–2001 season and again from 2008-2013 and spent his first 14 NHL seasons with the Tampa Bay Lightning before being bought out following the 2012–13 season and signing with the Philadelphia Flyers for $22.5 million over 5 years. He was chosen first overall by the Lightning in the 1998 NHL Entry Draft and was a member of their 2004 Stanley Cup championship team. Read more on Wikipedia

Among HOCKEY PLAYERS In Canada