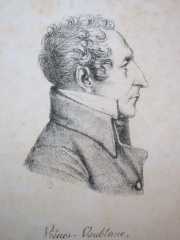 Vincent-Marie Viénot de Vaublanc baron of the Empire as known as "count de Vaublanc" ' (2 March 1756 – 21 August 1845) was a French royalist politician, writer and artist. He was a deputy for the Seine-et-Marne département in the French Legislative Assembly, served as President of the same body, and from 26 September 1815 to 7 May 1816, he was the French Minister of the Interior. His political career had him rubbing shoulders with Louis XVI, Napoleon Bonaparte, the Count of Artois (the future Charles X of France), and finally Louis XVIII. He was banished and recalled four times by different regimes, never arrested, succeeding each time in regaining official favour. Read more on Wikipedia

Since 2007, the English Wikipedia page of Vincent-Marie Viénot, Count of Vaublanc has received more than 13,286 page views. His biography is available in 18 different languages on Wikipedia making him the 5,911th most popular politician.

Among POLITICIANS In Haiti