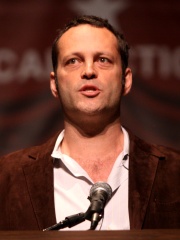 Vincent Anthony Vaughn (born March 28, 1970) is an American actor, producer, screenwriter, and comedian. Vaughn began acting in the late 1980s, appearing in minor television roles before attaining wider recognition with the 1996 comedy-drama film Swingers. He has appeared in a number of films in the 1990s, including the sports film Rudy (1993), the sci-fi adventure dinosaur film The Lost World: Jurassic Park (1997), the drama-thriller Return to Paradise (1998) and the remake of psychological thriller Psycho (1998). Read more on Wikipedia

Since 2007, the English Wikipedia page of Vince Vaughn has received more than 8,483,232 page views. His biography is available in 51 different languages on Wikipedia making him the 1,745th most popular actor.