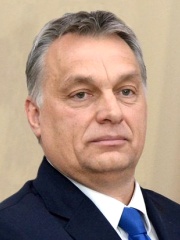 Viktor Mihály Orbán (Hungarian: [ˈviktor ˈorbaːn] (listen); born 31 May 1963) is a Hungarian politician who has served as prime minister of Hungary since 2010, previously holding the office from 1998 to 2002. He has presided over Fidesz, since 1993, with a brief break between 2000 and 2003. Orbán studied at Eötvös Loránd University and, briefly, at the University of Oxford before entering politics in the wake of the Revolutions of 1989. Read more on Wikipedia

Viktor Orbán is the Prime Minister of Hungary. He is most famous for his anti-immigration policies, his refusal to take in refugees, and his support of Russia.

Among politicians, Viktor Orbán ranks 1,577 out of 15,710. Before him are Amr ibn Hishām, John II of Aragon, Getúlio Vargas, Elizabeth of Portugal, Edward, King of Portugal, and Ahmad Shah Massoud. After him are Emeric, King of Hungary, Maximilian II Emanuel, Elector of Bavaria, Werner von Fritsch, Alexios II Komnenos, Bảo Đại, and Martin of Aragon.