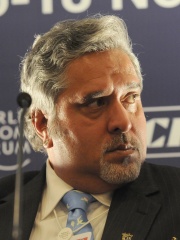 Vijay Vittal Mallya (born 18 December 1955) is an Indian businessman and former Member of Parliament (Rajya Sabha). He is the subject of an extradition effort by the Indian Government to return him from the UK to face charges of financial crimes in India.Mallya is a former owner of the Royal Challengers Bangalore cricket team. The son of a businessman, he is the ex-chairman of United Spirits, the largest spirits company in India, and continues to serve as chairman of United Breweries Group, an Indian conglomerate with interests including beverage alcohol, aviation infrastructure, real estate and fertilizer. Read more on Wikipedia

Since 2007, the English Wikipedia page of Vijay Mallya has received more than 5,906,768 page views. His biography is available in 26 different languages on Wikipedia making him the 329th most popular businessperson.

Among BUSINESSPEOPLE In India