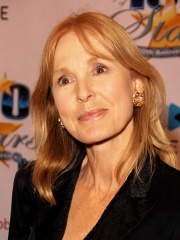 Victoria Tennant (born 30 September 1950) is an English actress. She is known for her roles in the TV miniseries The Winds of War and War and Remembrance, in which she appeared as actor Robert Mitchum's on-screen love interest, Pamela Tudsbury, as well as her supporting roles in such movies as All of Me (1984), The Holcroft Covenant (1985), Flowers in the Attic (1987), The Handmaid's Tale (1990), and L.A. Read more on Wikipedia

Since 2007, the English Wikipedia page of Victoria Tennant has received more than 1,310,608 page views. Her biography is available in 15 different languages on Wikipedia making her the 5,908th most popular actor.