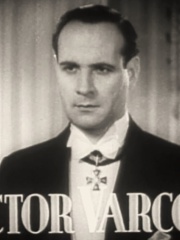 Victor Varconi (born Mihály Várkonyi, 31 March 1891 – 6 June 1976) was a Hungarian actor who initially found success in his native country, as well is in Germany and Austria, in silent films before relocating to the United States, where he continued to appear in films throughout the sound era. Read more on Wikipedia

Since 2007, the English Wikipedia page of Victor Varconi has received more than 45,124 page views. His biography is available in 15 different languages on Wikipedia making him the 4,159th most popular actor.