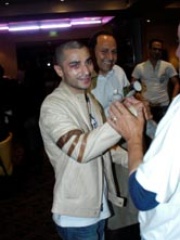 Vakhtang "Vic" Darchinyan (Armenian: Վախթանգ Դարչինյան; born 7 January 1976) is an Armenian professional boxer. He is a former world champion in two weight classes, having held the IBF flyweight title from 2004 to 2007; and the unified WBA (Super), WBC, IBF, and lineal super-flyweight titles between 2008 and 2010. Additionally, he has held a record four IBO titles at flyweight, super-flyweight, and twice at bantamweight between 2005 and 2011. Read more on Wikipedia

Since 2007, the English Wikipedia page of Vic Darchinyan has received more than 176,069 page views. His biography is available in 15 different languages on Wikipedia making him the 131st most popular boxer.

Among BOXERS In Armenia