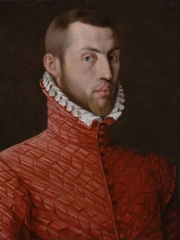 Vespasiano I Gonzaga, Duke of Sabbioneta (6 December 1531 – 26 February 1591) was an Italian nobleman, diplomat, writer, military engineer and condottiero. He is remembered as a patron of the arts and the founder of Sabbioneta, a town in Lombardy designed according to the Renaissance principles of the "ideal city". He was born in Fondi, a Colonna fief in the southern Latium, the son of Isabella Colonna and the condottiero Louis Gonzaga, lord of Palazzolo, a member of a cadet branch of the House of Gonzaga, Dukes of Mantua. Read more on Wikipedia

Page views of Vespasiano I Gonzagas by language

Among noblemen, Vespasiano I Gonzaga ranks 429 out of 843. Before him are Reza Pahlavi, Crown Prince of Iran, Prince Nicholas of Romania, Louis, Duke of Vendôme, Archduchess Catherine Renata of Austria, Frederick VIII, Duke of Schleswig-Holstein, and Marie Victoire de Noailles. After him are Infanta Amalia of Spain, William III, Landgrave of Thuringia, Prince Augustus Ferdinand of Prussia, Princess Margherita of Bourbon-Parma, Ingegerd of Norway, and Henriette of Cleves.