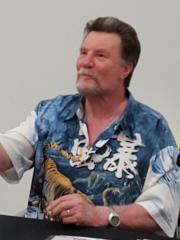 Vernon George Wells (born 31 December 1945) is an Australian character actor. He began appearing on Australian television shows in the mid-1970s, such as Homicide and Matlock Police and All the Rivers Run. He is best known to international audiences for his role of Wez in the 1981 science fiction action film Mad Max 2: The Road Warrior and Bennett in the military action film Commando.After Mad Max 2, Wells began appearing in Hollywood films, such as science fiction comedies Weird Science (1985) and Innerspace (1987). Read more on Wikipedia

Since 2007, the English Wikipedia page of Vernon Wells has received more than 251,496 page views. His biography is available in 16 different languages on Wikipedia making him the 2,199th most popular actor.