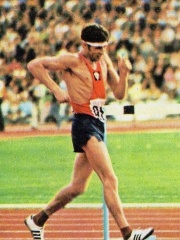 Veniamin Vasilievich Soldatenko (Russian: Вениамин Васильевич Солдатенко, born 4 January 1939) is a retired Soviet athlete who competed mainly in the 50 km walk. He acquired Kazakhstani citizenship after the dissolution of the Soviet Union. Soldatenko took up athletics in 1962 and became a member of the USSR National Team in 1967. Read more on Wikipedia

Since 2007, the English Wikipedia page of Veniamin Soldatenko has received more than 7,832 page views. His biography is available in 15 different languages on Wikipedia making him the 494th most popular athlete.