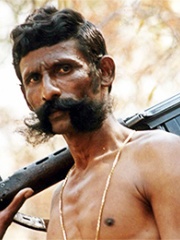 Koose Munisamy Veerappan Goundar (18 January 1952 – 18 October 2004), more commonly known as simply Veerappan, was an Indian bandit (dacoit) who was active for 36 years, kidnapping major politicians for ransom. He was charged with sandalwood smuggling in the scrub lands and forests in the states of Tamil Nadu, Karnataka and Kerala. He was wanted for killing approximately 184 people, about half of whom were police officers and forest officials and was also wanted for poaching more than 500 elephants and smuggling ivory worth US$2,600,000 (₹16 crore) and about 65000 kilograms of sandalwood worth approximately US$22,000,000 (₹143 crore). Read more on Wikipedia

Since 2007, the English Wikipedia page of Veerappan has received more than 3,420,541 page views. His biography is available in 17 different languages on Wikipedia making him the 379th most popular social activist.

Page views of Veerappans by language