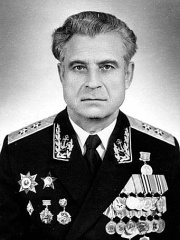 Vasili Aleksandrovich Arkhipov (Russian: Василий Александрович Архипов, IPA: [vɐˈsʲilʲɪj ɐlʲɪkˈsandrəvʲɪtɕ arˈxʲipəf], 30 January 1926 – 19 August 1998) was a Soviet Navy officer credited with preventing a Soviet nuclear strike (and, potentially, all-out nuclear war) during the Cuban Missile Crisis. Such an attack likely would have caused a major global thermonuclear response.As flotilla chief of staff and second-in-command of the diesel powered submarine B-59, Arkhipov refused to authorize the captain's use of nuclear torpedoes against the United States Navy, a decision requiring the agreement of all three senior officers aboard. Read more on Wikipedia

Vasily Arkhipov was a Soviet naval officer who is most famous for refusing to authorize the use of nuclear weapons against the United States during the Cuban Missile Crisis.