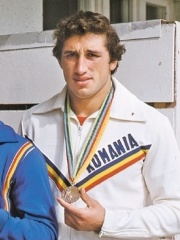 Vasile Andrei (born 28 July 1955) is a retired heavyweight wrestler from Romania. He competed in Greco-Roman wrestling at the 1980, 1984 and 1988 Olympics and won a bronze medal in 1980 and a gold medal in 1984. At the 1984 Olympics he also placed sixth in freestyle wrestling, and in 1980 and 1988 served as flag bearer for Romania at the opening ceremony. Read more on Wikipedia

Among wrestlers, Vasile Andrei ranks 165 out of 703. Before him are Nikolai Volkoff, Rustam Kazakov, Davey Boy Smith, Ștefan Rusu, Eric Bischoff, and Dan Henderson. After him are Rick Rude, The Boogeyman, George Steele, Hakuhō Shō, Jim Neidhart, and Braun Strowman.

Among WRESTLERS In Romania