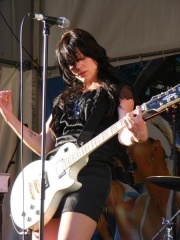 Vanessa Joy Amorosi (born 8 August 1981) is an Australian singer-songwriter and recording artist. Her combined album and single sales have reached over two million worldwide. She is known for her wide belting range ( being able to reach a C#6 with ease ) and her ability to vocally cover various genres of music including pop, rock, blues, jazz and gospel.Amorosi rose to fame in 1999 with the release of her debut single, "Have a Look", which reached gold status in Australia. Read more on Wikipedia

Among singers, Vanessa Amorosi ranks 3,217 out of 3,541. Before her are Yuri Chinen, Stormzy, Josh Turner, Sandro Nicolas, Dean, and Daniel O'Donnell. After her are Ilinca Băcilă, Debrah Scarlett, MC Lyte, Vrčak, Gor Sujyan, and Petra Frey.