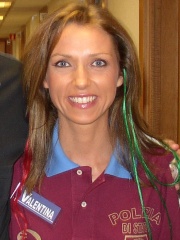 Valentina Vezzali (Italian pronunciation: [valenˈtiːna vetˈtsaːli]; born 14 February 1974) is an Italian fencer and politician. As fencer she has won six Olympic gold medals in foil competitions.Together with the German shooter Ralf Schumann, the Slovak slalom canoeist Michal Martikán and the Japanese female judoka Ryoko Tani, Vezzali is one of only four athletes in the history of the Summer Olympic Games to have won five medals in the same individual event. Read more on Wikipedia

Since 2007, the English Wikipedia page of Valentina Vezzali has received more than 100,739 page views. Her biography is available in 31 different languages on Wikipedia making her the 19th most popular fencer.

Most Popular Fencers in Wikipedia

Among FENCERS In Italy