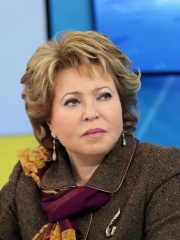 Valentina Ivanovna Matviyenko (Russian: Валентина Ивановна Матвиенко, Ukrainian: Валентина Іванівна Матвієнко; née Tyutina (Тютина; IPA: [ˈtʲʉtʲɪnə], Ukrainian: Тютіна); born 7 April 1949) is a Russian politician serving as the Senator from Saint Petersburg and Speaker of the Senate since 2011. Previously she was Governor of Saint Petersburg from 2003 to 2011. Born in Ukraine, Matviyenko began her political career in the 1980s in Leningrad (now Saint Petersburg), and was the First Secretary of the Krasnogvardeysky District Communist Party of the city from 1984 to 1986. Read more on Wikipedia

Among politicians, Valentina Matviyenko ranks 4,684 out of 15,577. Before her are Mahmud II, Fan Noli, Manuel Belgrano, Girma Wolde-Giorgis, Stefan Vladislav, and Nikolay Shvernik. After her are Maximilien de Béthune, Duke of Sully, Leo I, King of Armenia, Treniota, Nariman Narimanov, Stefan Uroš I, and Muzio Attendolo Sforza.