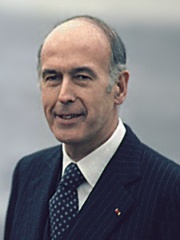 Valéry René Marie Georges Giscard d'Estaing (UK: , US: , French: [valeʁi ʁəne maʁi ʒɔʁʒ ʒiskaʁ dɛstɛ̃] (listen); 2 February 1926 – 2 December 2020), also known as Giscard or VGE, was a French politician who served as President of France from 1974 to 1981.After serving as Minister of Finance under prime ministers Jacques Chaban-Delmas and Pierre Messmer, Giscard d'Estaing won the presidential election of 1974 with 50.8% of the vote against François Mitterrand of the Socialist Party. His tenure was marked by a more liberal attitude on social issues—such as divorce, contraception and abortion—and attempts to modernise the country and the office of the presidency, notably overseeing such far-reaching infrastructure projects as the TGV and the turn towards reliance on nuclear power as France's main energy source. Giscard d'Estaing launched the Grande Arche, Musée d'Orsay, Arab World Institute and Cité des Sciences et de l'Industrie projects in the Paris region, later included in the Grands Projets of François Mitterrand. Read more on Wikipedia

Among politicians, Valéry Giscard d'Estaing ranks 639 out of 15,577. Before him are Michael of Russia, James Monroe, Ngo Dinh Diem, Sweyn Forkbeard, Lucius Tarquinius Priscus, and Arthur Seyss-Inquart. After him are Ptolemy II Philadelphus, Christian II of Denmark, Philip I of France, Tigranes the Great, Miloš Zeman, and Jalal ad-Din Mingburnu.