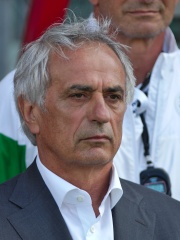 Vahid Halilhodžić (Bosnian pronunciation: [ʋȃ:xid xǎlilxodʒitɕ]; born 15 October 1952) is a Bosnian professional football manager and former player who is the head coach of the Morocco national team. He is regarded as one of the most successful Bosnian football managers.Regarded as one of the best Yugoslav players in the 1970s and 1980s, Halilhodžić had successful playing spells with Velež Mostar and French clubs Nantes and Paris Saint-Germain before retiring in the mid-1980s. During that time, he earned 15 full international caps for Yugoslavia and was part of national squads who won the 1978 European Under-21 Championship and played at the 1982 FIFA World Cup. Read more on Wikipedia

Vahid Halilhodžić is most famous for being the director of the movie "No Man's Land" which won the Palme d'Or at the Cannes Film Festival in 2001.

Among SOCCER PLAYERS In Bosnia and Herzegovina