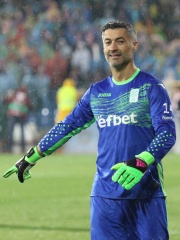 Vítor Manuel Martins Baía, OIH (Portuguese pronunciation: [ˈvitɔɾ bɐˈiɐ]; born 15 October 1969) is a Portuguese retired footballer who played as a goalkeeper. One of the most decorated goalkeepers of all time, his career was intimately connected with FC Porto, which he started representing professionally still in his teens, helping it to 27 titles and eventually remaining with the club in an ambassadorial role. Also having played for Barcelona, Baía appeared with the Portugal national team in two European Championships and the 2002 World Cup. Read more on Wikipedia

Since 2007, the English Wikipedia page of Vítor Baía has received more than 337,317 page views. His biography is available in 37 different languages on Wikipedia making him the 725th most popular soccer player.