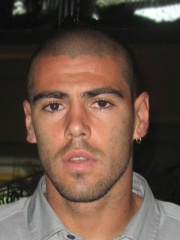 Víctor Valdés Arribas (Spanish pronunciation: [ˈbiktoɾ βalˈdes aˈriβas]; born 14 January 1982) is a Spanish football coach and former professional player. As a player, he played as a goalkeeper. He spent most of his professional career with Barcelona in La Liga, and is regarded as one of the best goalkeepers in the club's history, having appeared in 535 official games for the club and won 21 major titles, notably six La Liga titles and three UEFA Champions League championships. Read more on Wikipedia

Since 2007, the English Wikipedia page of Víctor Valdés has received more than 2,504,491 page views. His biography is available in 65 different languages on Wikipedia making him the 458th most popular soccer player.