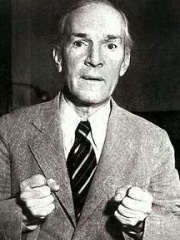 Upton Beall Sinclair Jr. (September 20, 1878 – November 25, 1968) was an American writer, muckraker, political activist and the 1934 Democratic Party nominee for Governor of California who wrote nearly 100 books and other works in several genres. Sinclair's work was well known and popular in the first half of the 20th century, and he won the Pulitzer Prize for Fiction in 1943. In 1906, Sinclair acquired particular fame for his classic muck-raking novel, The Jungle, which exposed labor and sanitary conditions in the U.S. Read more on Wikipedia

Among writers, Upton Sinclair ranks 1,612 out of 5,794. Before him are Ken Wilber, Bhāsa, Paul Gerhardt, Hannah Szenes, Notker the Stammerer, and Josef Čapek. After him are Ghassan Kanafani, Abu Tammam, Aphrahat, Vicki Baum, Alexander Polyhistor, and Giorgio Bassani.