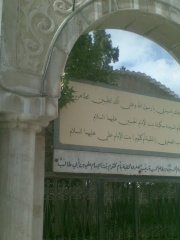 Zaynab al-Ṣughrā (Arabic: زَيْنَب ٱلصُّغْرَىٰ, lit. 'Zaynab the Younger'), also known by her kunya Umm Kulthūm bint ʿAlī (Arabic: أُمّ كُلْثُوم بِنْت عَلِيّ), was the granddaughter of the Islamic prophet Muhammad and the daughter of Ali. Whether or not she was married to the Rashidun caliph Umar is a disputed topic between the Sunni and Shia. Read more on Wikipedia

Among religious figures, Umm Kulthum bint Ali ranks 724 out of 2,238. Before her are Antipope Nicholas V, Josephine Bakhita, Romuald, Therese Neumann, Patriarch Nikon of Moscow, and John the Merciful. After her are Onesimus, Nectarios of Aegina, Papias of Hierapolis, Emma Morano, Nikephoros I of Constantinople, and Andrea Amati.

Among people born in 630, Umm Kulthum bint Ali ranks 6. Before her are Constans II, Pope Conon, Ibrahim ibn Muhammad, Sigebert III, and Di Renjie. After her are Wamba, Anastasius Sinaita, and Fausta.