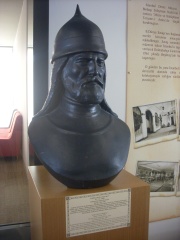 Tzachas (Greek: Τζαχᾶς, romanized: Tzachás), also known as Chaka Bey (Turkish: Çaka Bey) was an 11th-century Seljuk Turkish military commander who ruled an independent state based in Smyrna. Originally in Byzantine service, he rebelled and seized Smyrna, much of the Aegean coastlands of Asia Minor and the islands lying off shore in 1088–91. At the peak of his power, he even declared himself Byzantine emperor, and sought to assault Constantinople in conjunction with the Pechenegs. In 1092, a Byzantine naval expedition under John Doukas inflicted a heavy defeat on him and retook Lesbos, while in the next year he was treacherously slain by his son-in-law Kilij Arslan I. Read more on Wikipedia

Since 2007, the English Wikipedia page of Tzachas has received more than 85,335 page views. His biography is available in 16 different languages on Wikipedia. Tzachas is the 880th most popular military personnel (up from 936th in 2019).

Page views of Tzachas by language

Among people born in 1100, Tzachas ranks 50. Before him are Bretislav II, Malmfred of Kiev, Peter Bartholomew, Malik Shah, Duqaq, and Svatopluk, Duke of Bohemia. After him are Matthew of Edessa, Yağısıyan, Ingeborg of Kiev, Roger of Salerno, Roussel de Bailleul, and Petrus Comestor. Among people deceased in 1092, Tzachas ranks 5. Before him are Malik-Shah I, Nizam al-Mulk, Vratislaus II of Bohemia, and Conrad I, Duke of Bohemia.