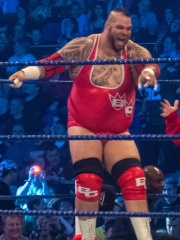 George Murdoch (born February 21, 1973) is an American actor, cable television political commentator, and professional wrestler. He is known for his tenure in WWE as Brodus Clay, and in Total Nonstop Action as Tyrus. After training in WWE's farm territories Deep South Wrestling and Florida Championship Wrestling, Murdoch debuted during the fourth season of WWE NXT, a WWE television show where several rookies were paired with WWE wrestlers as mentors. Read more on Wikipedia

Since 2007, the English Wikipedia page of Tyrus has received more than 86,667 page views. His biography is available in 21 different languages on Wikipedia making him the 417th most popular wrestler.

Page views of Tyruses by language

Among wrestlers, Tyrus ranks 420 out of 562. Before him are Orlando Jordan, Yasemin Adar, Noriko Anno, Dorjsürengiin Sumiyaa, Yusup Abdusalomov, and Tye Dillinger. After him are Brian Kendrick, Armen Vardanyan, Monika Michalik, Elias, Enzo Amore, and Neville.