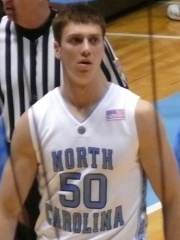 Andrew Tyler Hansbrough (born November 3, 1985) is an American professional basketball player for the Sichuan Blue Whales of the Chinese Basketball Association (CBA). In college, Hansbrough was a star with the North Carolina Tar Heels from 2005 to 2009. He was the first player in Atlantic Coast Conference history to be named first-team All-ACC four times and to be a first-team All-American four times (he was a consensus first team pick in three of those seasons). Read more on Wikipedia

Since 2007, the English Wikipedia page of Tyler Hansbrough has received more than 1,781,412 page views. His biography is available in 18 different languages on Wikipedia making him the 864th most popular basketball player.