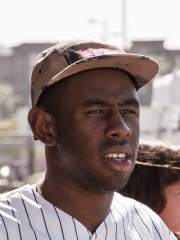 Tyler Gregory Okonma (born March 6, 1991), better known as Tyler, the Creator, is an American rapper, musician, songwriter, producer, actor, and visual artist. He rose to prominence in the early 2010s as the co-founder and de facto leader of alternative hip hop group Odd Future, and has performed on and produced songs for nearly every Odd Future release.Following a large contribution to Odd Future's early work, Tyler released his debut solo mixtape Bastard in 2009. After releasing his debut studio album Goblin via XL Recordings in April 2011, he signed a joint deal with RED Distribution and Sony Music Entertainment for himself and his label Odd Future Records. Read more on Wikipedia

Since 2007, the English Wikipedia page of Tyler, the Creator has received more than 6,892,846 page views. His biography is available in 27 different languages on Wikipedia making him the 966th most popular musician.

Page views of Tyler, the Creators by language

Among musicians, Tyler, the Creator ranks 969 out of 2,258. Before him are Blackie Lawless, Shavo Odadjian, David Sanborn, Prince Buster, Seasick Steve, and Carmine Appice. After him are Gary Peacock, Vinnie Colaiuta, Pixinguinha, Clark Terry, Michael Weikath, and Geoff Emerick.