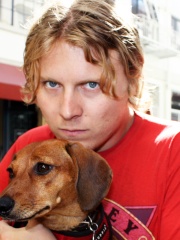 Ty Garrett Segall (born June 8, 1987) is an American multi-instrumentalist, singer-songwriter and record producer. He is best known for his solo career during which he released eleven studio albums, alongside various EPs, singles, and collaborative albums, including a 2012 release recorded with his live band billed as the Ty Segall Band and another from that same year with Tim Presley of White Fence. Segall is also a member of the bands Fuzz, Broken Bat, the CIA, GØGGS, and Wasted Shirt, and is a former member of the Traditional Fools, Epsilons, Party Fowl, Sic Alps, and the Perverts.During live performances, Segall is currently backed by the Freedom Band, consisting of regular collaborators Mikal Cronin (bass), Charles Moothart (drums), and Emmett Kelly (guitar), playing alongside Ben Boye (piano) and Shannon Lay. Read more on Wikipedia

Since 2007, the English Wikipedia page of Ty Segall has received more than 1,031,421 page views. His biography is available in 15 different languages on Wikipedia making him the 2,217th most popular musician.

Among musicians, Ty Segall ranks 2,223 out of 2,258. Before him are Nina Gordon, Matt Cardle, Katy B, Neko Case, Flume, and Agnete Johnsen. After him are Danja, Vitamin C, Miri Ben-Ari, Benjamin Burnley, Chantal Kreviazuk, and Jeremy Davis.