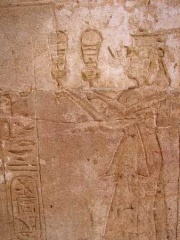 Twosret, also spelled Tawosret or Tausret (d. 1189 BC conventional chronology) was the last known ruler and the final Pharaoh of the Nineteenth Dynasty of Egypt. She is recorded in Manetho's Epitome as a certain Thuoris, who in Homer is called Polybus, husband of Alcandra, and in whose time Troy was taken. Read more on Wikipedia

Twosret is most famous for being the last ruler of the Nineteenth Dynasty of Egypt.

Page views of Twosrets by language

Among politicians, Twosret ranks 2,184 out of 15,710. Before her are Anne Marie d'Orléans, Theodosius III, Musa ibn Nusayr, Solomon, King of Hungary, Louis Ferdinand, Prince of Prussia, and George Villiers, 1st Duke of Buckingham. After her are Anne de Montmorency, Louis Philippe I, Duke of Orléans, Necmettin Erbakan, James II of Scotland, Yazid II, and Aspar.