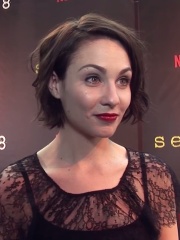 Tuppence Middleton (born 21 February 1987) is an English actress known for her performances in film, television and theatre. In 2010, she was nominated for the London Evening Standard Film Awards for Most Promising Newcomer. Middleton appeared in various films before making her breakthrough in Morten Tyldum's historical drama The Imitation Game (2014), and continued to appear in the The Wachowskis science fiction film Jupiter Ascending (2015), Alfonso Gomez-Rejon's historical drama The Current War (2017), the film Downton Abbey (2019), and David Fincher's film Mank (2020). Read more on Wikipedia