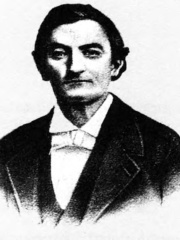 Tuone Udaina (1823 – 10 June 1898; Antonio Udina in Italian) was the last person to have any active knowledge of the Dalmatian language, a Romance language that had evolved from Latin along the eastern coast of the Adriatic Sea. He was the main source of knowledge about his parents' dialect, that of the island of Veglia (Krk in Croatian), for the linguist Matteo Bartoli, who recorded it in 1897. Udaina bore the nickname Burbur, the etymology of which is uncertain. Read more on Wikipedia

Among writers, Tuone Udaina ranks 1,748 out of 5,794. Before him are Nikephoros Bryennios the Younger, Eustathius of Thessalonica, David Woodard, Caecilius Statius, Miklós Nyiszli, and Adamantios Korais. After him are Pacuvius, Meleager of Gadara, Annette von Droste-Hülshoff, Guillaume de Lorris, Miguel Hernández, and Philemon.

Among WRITERS In Croatia