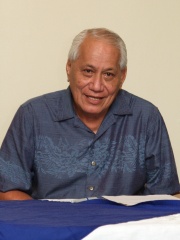 Tui Ātua Tupua Tamasese Tupuola Tufuga Efi (born Olaf "Efi" Tamasese) (born 1 March 1938), is a Samoan political leader and as holder of the Tama-a-Aiga Tupua title, is one of the four paramount royal chiefs of Samoa. He also holds the honorific pāpā title of Tui Atua (King of Atua).Tupua Tamasese was Samoa's head of state from 2007 to 2017. Previously he was Prime Minister of Samoa from 1976 to 1982 and again later in 1982. Read more on Wikipedia

Since 2007, the English Wikipedia page of Tufuga Efi has received more than 96,590 page views. His biography is available in 28 different languages on Wikipedia making him the 7,986th most popular politician.

Among politicians, Tufuga Efi ranks 7,942 out of 14,801. Before him are Liaquat Ali Khan, Godwin, Earl of Wessex, Sartaq Khan, Al-Mu'azzam Isa, Elihu Root, and Jacob Tullin Thams. After him are Aleksandras Stulginskis, Lee Radziwill, Octavian Goga, Vladislav I of Wallachia, Harri Holkeri, and Hermann Billung.

Others born in Samoa

Among POLITICIANS In Samoa