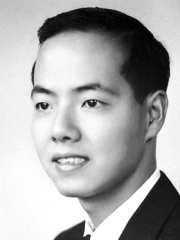 Tsung-Dao Lee (Chinese: 李政道; pinyin: Lǐ Zhèngdào; born November 24, 1926) is a Chinese-American physicist, known for his work on parity violation, the Lee–Yang theorem, particle physics, relativistic heavy ion (RHIC) physics, nontopological solitons and soliton stars. He was a University Professor Emeritus at Columbia University, where he taught from 1953 until his retirement in 2012.In 1957, Lee, at the age of 30, won the Nobel Prize in Physics with Chen Ning Yang for their work on the violation of the parity law in weak interactions, which Chien-Shiung Wu experimentally proved from 1956 to 1957, with her legendary Wu experiment. Lee remains the youngest Nobel laureate in the science fields after World War II. He is the third-youngest Nobel laureate in sciences in history after William L. Bragg (who won the prize at 25 with his father William H. Bragg in 1915) and Werner Heisenberg (who won in 1932 also at 30). Read more on Wikipedia

Tsung-Dao Lee is most famous for his work in the development of the theory of parity violation.

Among PHYSICISTS In China