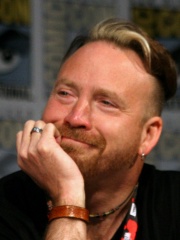 Trevor Devall (born November 10, 1972) is a Canadian voice actor and podcaster. He worked for various other studios in Vancouver, British Columbia, Canada for years, before he relocated to Los Angeles, California in 2013. He is best known for voicing Hot Dog in Krypto the Superdog, Rocket Raccoon in the animated TV series Guardians of the Galaxy, Emperor Palpatine in Lego Star Wars, Pyro in X-Men Evolution, Dukey in seasons 5 and 6 of Johnny Test, and various characters in the Netflix original series F Is for Family, as well as providing voices in English-language versions of various anime series, most notably as Mu La Flaga from Mobile Suit Gundam SEED, Mukotsu from InuYasha, Scourge from Transformers: Cybertron, Mr. Read more on Wikipedia

Since 2007, the English Wikipedia page of Trevor Devall has received more than 306,445 page views. His biography is available in 21 different languages on Wikipedia making him the 8,744th most popular actor.