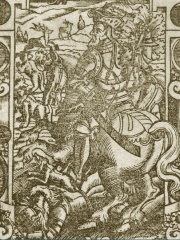 Treniota (Belarusian: Транята; Troniata; c. 1210–1264) was the Grand Duke of Lithuania (1263–1264).Treniota was the nephew of Mindaugas, the first and only king of Lithuania. While Mindaugas had converted to Christianity in order to discourage Livonian Order and Teutonic Knights attacks on Lithuania, becoming king in the process, Treniota remained a staunch pagan. Read more on Wikipedia

Since 2007, the English Wikipedia page of Treniota has received more than 52,033 page views. His biography is available in 24 different languages on Wikipedia. Treniota is the 4,687th most popular politician (down from 4,293rd in 2019).

Page views of Treniotas by language

Among politicians, Treniota ranks 4,687 out of 15,577. Before him are Girma Wolde-Giorgis, Stefan Vladislav, Nikolay Shvernik, Valentina Matviyenko, Maximilien de Béthune, Duke of Sully, and Leo I, King of Armenia. After him are Nariman Narimanov, Stefan Uroš I, Muzio Attendolo Sforza, Warren Hastings, Julius Paulus Prudentissimus, and Charles II, Grand Duke of Mecklenburg-Strelitz.

Among people born in 1210, Treniota ranks 6. Before him are Pope Honorius IV, Pope Gregory X, Saadi Shirazi, Afonso III of Portugal, and Birger Jarl. After him are Chaka of Bulgaria, Floris IV, Count of Holland, Muqi, Guan Hanqing, Toros Roslin, and Joan of England, Queen of Scotland. Among people deceased in 1264, Treniota ranks 5. Before him are Pope Urban IV, Daniel of Galicia, Vincent of Beauvais, and Emperor Lizong. After him are Rostislav Mikhailovich, Andrey II of Vladimir, and Gonzalo de Berceo.