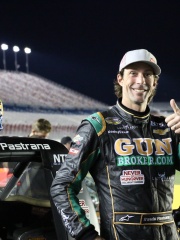 Travis Alan Pastrana (born October 8, 1983) is an American professional motorsports competitor and stunt performer who has won championships and X Games gold medals in several disciplines, including supercross, motocross, freestyle motocross, and rally racing. He runs a show called Nitro Circus, and has competed in the Global RallyCross Championship and the Monster Jam circuit. Pastrana also has driven in NASCAR, and currently competes part-time in the Gander RV & Outdoors Truck Series, driving the No. Read more on Wikipedia

Since 2007, the English Wikipedia page of Travis Pastrana has received more than 1,662,242 page views. His biography is available in 18 different languages on Wikipedia making him the 732nd most popular racing driver.

Among RACING DRIVERS In United States