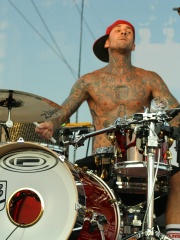 Travis Landon Barker (born November 14, 1975) is an American musician, songwriter, and record producer, best known as the current drummer for the rock band Blink-182. Barker has also performed as a frequent collaborator with hip hop artists, is a member of the rap rock group Transplants, founded the rock bands +44 and Box Car Racer, and most recently joined Antemasque and Goldfinger. He was a frequent collaborator with the now-late DJ AM, and together they formed TRV$DJAM. Due to his fame, Rolling Stone referred to him as "punk's first superstar drummer" as well as one of the 100 Greatest Drummers of All Time.Born in Fontana, California, Barker began drumming at an early age. Read more on Wikipedia

Since 2007, the English Wikipedia page of Travis Barker has received more than 5,356,131 page views. His biography is available in 38 different languages on Wikipedia making him the 1,482nd most popular musician.