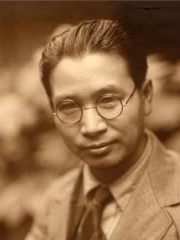 Toyohiko Kagawa (賀川 豊彦, Kagawa Toyohiko, 10 July 1888 – 23 April 1960) was a Japanese Christian pacifist, Christian reformer, and labour activist. Kagawa wrote, spoke, and worked at length on ways to employ Christian principles in the ordering of society and in cooperatives. His vocation to help the poor led him to live among them. Read more on Wikipedia

Since 2007, the English Wikipedia page of Toyohiko Kagawa has received more than 87,573 page views. His biography is available in 16 different languages on Wikipedia making him the 273rd most popular social activist.

Among social activists, Toyohiko Kagawa ranks 272 out of 426. Before him are Donald Watson, Gunnar Sønsteby, Nimr al-Nimr, Emmett Till, Flora MacDonald, and Udham Singh. After him are Kate Sheppard, Louise Bryant, Clara Barton, Toktogul Satylganov, Black Elk, and Zhang Guotao.