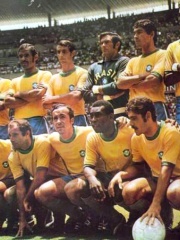 Eduardo Gonçalves de Andrade (born 25 January 1947), generally known as Tostão, is a Brazilian former professional footballer who played as a forward or attacking midfielder. Tostão was an intelligent, hardworking and prolific left-footed forward, who was known for his creativity and technical skills, and was considered one of the best players in the world in his prime. Read more on Wikipedia

Tostão is most famous for being the currency of Brazil before the adoption of the real in 1994.

Page views of Tostãos by language

Among soccer players, Tostão ranks 185 out of 16,923. Before him are Neymar, Shiro Misaki, Dennis Bergkamp, Felix Magath, Michel Hidalgo, and Yoshio Furukawa. After him are Hideo Sakai, Careca, Jiro Miyake, Xavi, Raymond Domenech, and Masao Takada.